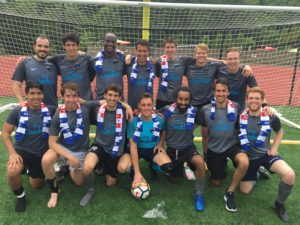 A team of amateur soccer players that compete in District Sports Men’s Premier League in D.C. have earned the chance to compete in the prestigious 2019 Lamar Hunt U.S. Open Cup, U.S. Soccer’s National Championship tournament. D.C. Cheddar, a team made up of players from four continents who work at local NGOs and non-profits, and study in local PhD and Law programs, will play in the qualifying round of the Cup later this month in D.C.

Ninety-four amateur teams from around the country have been admitted for the qualifying round, with the chance to advance to compete against professional teams later in the tournament. The amateur Cinderella squad at the U.S. Open Cup two years back, Christos FC, hailed from Baltimore, and advanced all the way to the fourth round of the tournament before being bounced by District’s professional team, D.C. United of Major League Soccer.  D.C. United was later eliminated in the final round of 16.

D.C. Cheddar qualified after winning two consecutive District Sports Premier League titles. They are the only amateur team from D.C. in this year’s Open Cup.

“We are so proud of D.C. Cheddar. Their appearance in the U.S. Open Cup is an opportunity for us to showcase the caliber of players who compete in District Sports Premier,” Alex Bearman, District Sports Executive Director, says. “It’s our goal to operate the most competitive amateur soccer league in the region.”

D.C. Cheddar formed in 2015, growing out of an intramural team at American University.

“DC has a great soccer culture and we’re very excited to be representing the nation’s capital in the Open Cup with such an internationally diverse squad,” said Gregg Tourville, D.C. Cheddar’s captain, who works during the day as a UX and Service Designer.

D.C. Cheddar will play another local team, Super Delegates FC of Maryland, on September 23 at 6:30 p.m. at Jelleff Recreation Center in Northwest.