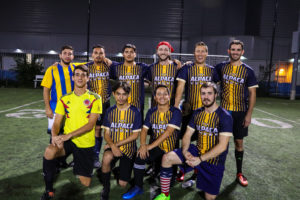 This fall on Monday nights at Bell High School in Columbia Heights, world famous food icon José Andrés and District Sports have teamed up to host the Think Food Group Copa. The Copa, powered by District Sports, pits employees from eight of Andrés’ restaurants against each other in an exciting fast-paced 7v7 soccer tournament.  Competing restaurants include Oyamel, China Chilcano, Zaytinya, and Jaleo to name a few. As a native of Spain,Andrés is known to a die-hard soccer fan and employees of his various establishments are proving to be pretty passionate too!

Come check out Think Food Group Copa every Monday night in October at 10:30 p.m.  Stay tuned for more details and good luck to all footballers!